We feel very lucky to have Alex Rowland as our PGA Professional, Alex is also our Club Secretary and is always on hand to help Visitors and Members with any questions they may have.

Alex started his golf just up the road at Padeswood & Buckley at the age of 11 where his dad, Brian first taught him to play. After a while it soon become apparent that he needed to be taught by a professional and booked him in with Alan Thompson at Heswall where Alex went from a 14 handicap down to 2 within 18 months.

At aged 18, Alan Thompson approached Alex to become one of his assistants at Heswall and Alex took him up on his offer and  turned professional and passed his PGA Qualifications in 1991 while under Alans’ wing.

Alex then tried his hand at different tours and has played on the North Region, Hippo tour, Mastercard (now euro pro) and has played in a Challenge Tour event. 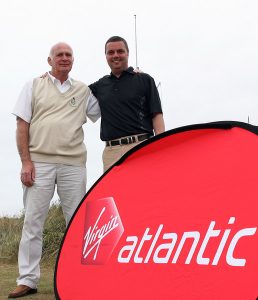 Alex is pictured with Andre Roberts after they qualified at St Annes Old Links to play in the finals of the Virgin Atlantic Trophy in the Bahamas in 2010……………only seems five minutes ago if Andre is telling the story !!!!!!!